March Finds Oz at Home and Abroad for Fans of all Ages!

Expect film screenings of the MGM classic all year as we honor the musical’s 80th anniversary. Here’s one in Wichita, Kansas, March 14. 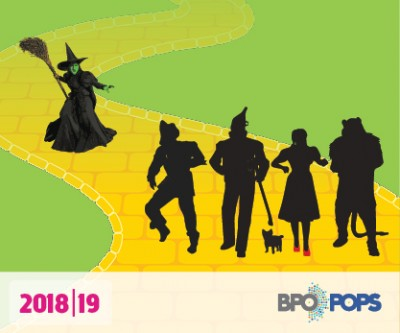 The birthplace of MGM composer Harold Arlen is the perfect spot for The Wonderful Music of Oz. This concert features songs from several versions of the Oz story. Buffalo, NY, March 15 & 16. A children’s ballet of The Wizard of Oz will be danced in Bellevue, Wash., March 16-17.

Stops on the current national tour of The Wizard of Oz are:

March 1 in Saginaw, Michigan, The Wizard of Oz also comes to the stage. This is the MGM version of the show, but the date isn't on the national touring agenda, so appears to be a different Broadway-style production. Through March 3 in Northfield, Minn., a non-musical version of The Wizard of Oz remains open for family audiences. No idea what The Wizard of Oz Unplugged is, but if you’re in Waukesha, Wisc., March 7-10, you can find out! March 9-April 14, this Wizard of Oz production in Atlanta comes with a “folk art” twist. Details on the Rich Theatre’s website. March 22-30 in Wilmington, Delaware, “Judy Garland ‘World’s Greatest Entertainer’” brings Judy’s American Songbook to the stage with a six-person cast. This is the world premiere of a show that aspires to a national tour.

In lands far from Kansas... March 8-17 in Rockdale, NSW, Australia, The Wizard of Oz will be staged as a live musical celebration of the film's 80th anniversary. In Canada (Victoria, BC) the symphony will perform the score live to MGM’s Oz on the big screen March 8-9. March 21, 24 and 26 in Vienna, Austria, the Royal Shakespearean Company's version of The Wizard of Oz will be staged at the Volksoper.

Article by The International Wizard of Oz Club A Daily Dose of Oz COVID-19 UPDATE: WE ARE CLOSED